As a schoolchild, my first and much-hated needlework project was to handsew a dirndl skirt. I was on the tubby side (not much has changed) and the skirt was red with white spots. My mother probably thought it would look charming but I knew I would look like a fat ladybird so, like Penelope and her shroud, I put off finishing it and learned to sew very slowly. Dirndl skirts and I have not crossed paths again for over 50 years.

We have just been to Bavaria to attend a family event. Many guests wore traditional clothes which, for the women, meant a dirndl costume. Now I have seen what it ought to look like, I must admit that the full dirndl costume can look good on old and young – and even the tubby. It isn’t just a skirt. There is a bodice, a blouse, a full skirt and an apron. Contemporary and expensive dirndl costumes are superbly tailored and very expensive.  They can be made from silks, cottons, linen, velvet or wool depending on the season, or the event at which they are worn.

A dirndl worn at a wedding. An apron knotted at the front means the wearer is unmarried

A characteristic of the traditional dirndl is the printed cotton from which skirt and bodice are sometimes cut. The repeat patterns are small and delicate. At one time they would have been block-printed, and the blue and white fabrics would probably have been paste-resist-printed and indigo-dyed. This fabric is increasingly rare although there are still workshops in Hungary and Austria. Eastern Europe was a strong centre for these fabrics.

Last year the Devon Guild of Craftsmen held an exhibition called Tracing the Blueprint. The exhibition told the story of ‘Blauwdruk’ fabric from Eastern Europe which made its way to South Africa via trade,  European settlers and Manchester printers. Blue and white 100% cotton fabric is now printed in South Africa, although not using a traditional process. It is known as shweshwe and the Three Cats trademark of Da Gama Textiles is famous. Shweshwe used to be transported by sea and was heavily starched to help it survive the long journey. Although this is no longer necessary, heavy starching is still used to denote its status as true shweshwe. I have a pack of shweshwe by me as I write and the smell is strong and ‘inky’, but not unpleasant.

Shweshwe fabric made by Three Cats

Last year I visited the studio of Martina Gistl near Gmünd in Bavaria. Martina screenprints traditional patterns onto cotton and linen at her studio. She has a beautiful workspace and you can look down on the printing process as she passes the ink-loaded squeegee across the fabric, forcing the ink down onto the stretched fabric. After the fabric dries it is heat-fixed (but I don’t think it’s a steam process).

The squeegee is pushed firmly across the screen 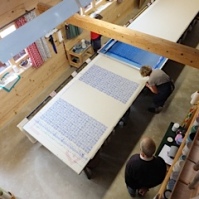 Looking down on the print table

There is such fascination in the journeys these strongly related patterns and designs have made, their natural dye origins and their contemporary uses and interpretations.

The Gistl studio also prints paper, from the famous factory in Gmünd

Swatches of patterns from the Gistl workshop 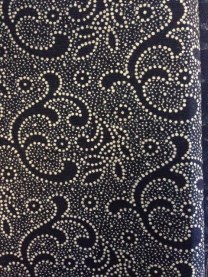 Shweshwe fabric made by Three Cats

Chicken basket, or qafas, from the Tihama (Red Sea coastal plain) of Yemen

Bride’s Basket or marguna, from the Siwa Oasis, Egypt

Because the wax I use for resist work contains a proportion of beeswax, my enthusiasm for a world of healthy bees extends to work materials. I don’t have beehives but I have several nests of bee-tubes and last year they were occupied for the first time. The bees that use the tubes are Osmia rufa, also known as the Red Mason Bee. They aren’t wax producers, but they are excellent pollinators and in the recent warmer weather we watched several of them hatching. You can see the red and yellow clay plugs that the bees make to seal the tubes. Both clay colours are local (obviously, unless bees use the bus) and typical of this area of West Devon. Some of the tubes in the image weren’t occupied last year but where you see a hole in the clay, the bees have emerged. There is an interesting download here if you want to know more about these bees.

Next weekend there is a festival of basketry at Dartington in south Devon. It’s called Basketry and Beyond and it focuses on the themes of fishing, farming and fashion. The festival features several workshops and demonstrations given by international makers, a parade, residencies, etc. A beautiful exhibition of baskets called From Bare Stems is currently showing at High Cross House, Dartington, as part of the festival. It has been curated by fellow Devon Guild of Craftsmen member Hilary Burns. We went to see it this week on a thoroughly wet day, the dripping woodland surrounding High Cross House smelling intensely of wild garlic. The two baskets shown above were loaned to the exhibition by Jenny Balfour Paul. Many thanks to her for supplying captions.

The little stone beast is not connected to anything on this page except that I like it and beast begins with B. Like the baskets, I went to visit it this week. It’s from a tiny, ancient church called Honeychurch; the building has hardly been touched since it was built in the 12th Century.

One final B. The bull’s-eye rash that sometimes develops with Lyme Disease can be seen in this link . If you walk your dog in the country (particularly where there are deer), work with sheep, or live where GP’s aren’t clued up on the disease, please read it. I noticed a bull’s-eye rash some years ago from an infected tickbite and had to go to considerable lengths to be prescribed the correct antibiotic. The incorrect antibiotic won’t clobber Lyme Disease. If I hadn’t once seen an image of this rash, I wouldn’t have known to persist and might have suffered long-term consequences. 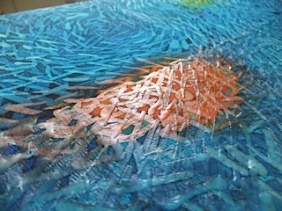 We made a road trip from Darwin to Perth in late 2012. Ever since, I have been trying to respond to my observations and feelings about Australian colours and landscape through my work. I didn’t want to represent landscape, although one or two pieces have recognisable elements in them, such as trees. I don’t want to blog about my thoughts when I was planning the work except to say that each has to function as a flat or hung painting, and each piece must be wearable.

This, I began to realise, poses a problem. British light + clients don’t always respond well to the colours of Australia as wearable textiles. Australian colours are often vivid, highly contrasting and very, very bright. It’s to do with the intense heat, the light, the colour of the earth, sky and sea.  British wearers often choose muted and more subtle shades to wear.  These suit our pallid, sun-starved complexions and go very well with incessant rain.

So I have no idea if these vivid scarf-paintings will find a UK market.

I have been working with steam-fixed dyes on silk crêpe de Chine, using wax-resist. I have layered up the wax and dyes until the fabric is as stiff as a board. Each wax layer is made from hundreds of waxed brush strokes which undulate over the surface. The layers have sometimes been 8 deep. Before I de-waxed the last piece I weighed it out of curiosity because it seemed really heavy. I found that it had lost 107 grams of wax after I had steamed and soaked out the last wax residue. The piece shown above (all the images are from the same piece) took me several days and was very time consuming, but I am pleased with the technique of multi-layered marks.

This particular piece is about the colours of Broome, Western Australia, where the desert meets the sea in an astonishing cymbal-crash of bright rusty red and turquoise blue. The landscape sketch shows patches of mangrove: crocodiles are often seen in the area.