I’m back from a trip to the DHA (Dyes in History and Archaeology) Conference in La Rochelle. La Rochelle hosted the ISEND Conference in 2011 and so I was already familiar with the conference venue – a former fishmarket, now the exhibition and conference centre  L’espace Encan.

This is a text-heavy post, so here’s a picture of La Rochelle to keep you going.

A DHA conference annually attracts a wide variety of delegates from various disciplines. This year there were about 90 of us. Our number included chemists, conservators, artists, historians, researchers working with natural dyes, and students at various academic levels. At a DHA conference you can find yourself sitting next to someone from the British Museum, the Louvre or the Rijksmuseum, or an independent scholar who is simply passionate about parchment. It is a friendly assembly and all are welcome. Even if, as a non-chemist, you sometimes sit boggle-eyed through muscular technical papers full of graphs, analysis and molecular data, there is always something to be learned. I’m told that in early DHA days (this was the 32nd meeting!) there was a heavy bias towards these more scientific analytical papers but that nowadays the balance is more even, with a good mix of historic /scientific presentations. The selection committee who choose proposed papers must have an intensely hard job. Of the 24 or so papers accepted, several intrigued me but as none have yet been published this handful of comments remains general.

One paper involved the analysis of  purple-dyed parchments. Very little work has been done to analyse the source of the purple colour in such codices and as far as I understand, there is currently no scientific evidence that shellfish dyes were used on the parchments. Non-invasive methods are normally used in their analysis, essential if precious manuscripts are to be studied without damage, and these methods can make it more difficult to identify dyestuffs. (With a parchment it isn’t so easy to remove a physical sample as it can be from a textile, where a loose fibre may be available).

There was a mention of dyeing parchment with orchil, and my ears twitched. Last year I was asked to dye some parchment samples with orchil – and dye they certainly did. But it was apparent that the temperatures and immersion involved in dyeing with orchil stiffened and damaged the parchment quality. I felt that this method wasn’t viable. Cold-dyeing seemed to yield a more sympathetic result but I have no idea to what extent the parchment quality was affected as I was only sent miniscule pieces of parchment to dye.

In the post-presentation question session it emerged that the term ‘dyeing’ means different things to different people. Some delegates considered ‘dyeing’ could be the layered painting on of dye and not dyeing by immersion, as working dyers think of it. Now, I should say that I tried painting orchil on too, but soon lost the will to live. It would be immensely protracted to paint on sufficient orchil to build up a good colour. That’s not to say it would be impossible, I just didn’t have the time or the resources to continue.

It will be interesting to learn more about this research. Maybe at Glasgow and DHA 33 next year? The dates are October 30th – 31st 2014.

Magnified images had been studied by the presenters which showed lumpy-looking particles in the red lake used in several medieval paintings. These indicated that they were reclaimed dyes from red-dyed wool, made into lakes for painting. The reclaiming of red lake pigment dyestuffs from clippings of dyed wool revealed that it made good economic sense to extract the dyes and to reuse them as painting materials. The dyeing of red, from whichever dye source, was expensive and thus waste material might be reprocessed. Again, I encountered problems with a mutual understanding. Initially I was confused by the words ‘shearings and clippings’ which were used by the presenters. I associate these words primarily with sheep-shearing!  In the paper the words referred to waste dyed cloth after cutting woven material – or yarn.

The finding of these ‘reclaimed reds’ isn’t in itself new. A 1996 paper by Jo Kirby and Raymond White goes into great detail (find it here) and also lists a  number of paintings in which red lake pigment dyestuffs have been found. Have a look. You may be amazed.

A couple of years ago, at DHA in Lisbon, I presented a paper about the trade in dye lichens from Angola through Lisbon. I have yet to publish this, for several complicated reasons. But I had an interesting conversation with another delegate which led me to sending a very small quantity of dye lichen and a recipe to the University of Évora. I heard no more, and forgot all about it. At La Rochelle my Portuguese colleague and  her team presented a paper in which they had measured and tracked the breakdown of the depsides and depsidones (the dye precursors) in the orchil preparation process until purple chromophores formed. Chromophores are the part of the molecule responsible for colour. The chemistry was patiently explained to me in a coffee break and I now understand rather more about the process that before – although I wouldn’t like to take an exam just yet. DHA is great for this kind of contact and co-operation.

If you read the previous post you will now that I was co-presenting a paper at DHA 32  and I wrote about the snaggly-toothed IT gremlins that lurk for unprepared presenters. I am pleased to report that my eminent co-author, Zvi Koren, had done an admirable job on gremlin-bashing (he’s ace at puns too) and everything loaded and presented totally as expected. So did everyone else’s, and we all benefited from calm, unobtrusive technical expertise delivered by Florent Glatard of ARRDH- CRITT Horticole. Our presentation was really well-received but I will not be writing about it until formal publication.

Anne de la Sayette is the Directrice of ARRDHOR – CRITT Horticole, a ‘centre of research, innovation and technology transfer in horticulture’. Dominique Cardon is well known to most natural dyers as author of Natural Dyes: Sources, Tradition, Technology and Science. She is also Emerita Senior Researcher at CNRS, the French national centre of scientific research. CIHAM UMR 5648 CNRS  (an institution, not a mathematical  equation..)  is one of the most important research centres in France for history, literature and archaeology of the Middle Ages. A new book by Dominique is about to be published but I don’t have the details: as soon as I do I will add them to a post.

If you have got this far you deserve a pictorial prize. Using photos from DHA is tricky as I feel I should ask people’s permission before posting their images on a blog, so here is something rather special from the trip home. 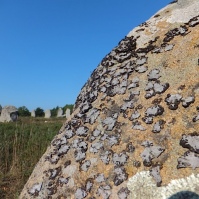 Orchil lichen on stone at Carnac

One of the Carnac alignments

I had never been to Carnac in Brittany until last week and I had no idea of the scale and breadth of the entire site. But it seemed most serendipitous to discover, on some stones of the alignments, a quantity of orchil lichen. Naturally, I did not touch it. But here are some images to reward stalwart readers. The orchil lichen is in the left hand image only.