I have been working on silk for 27 years, using French steam-fixed dyes.  Until a few years ago I used spirit-based gutta resist as there were no water-based products available that would create a fine line and prevent dyes from bleeding through it, especially when working with several applications of dye.

The problem of removing the gutta always concerned me as it needed either to be dry-cleaned or dunked in white spirit after steaming. Dry-cleaning has always been a practical problem as few businesses are prepared to take on hand-dyed work and when they will, it is expensive. The fluid commonly used in dry-cleaning is bad news if you are at all concerned with environmental issues, and white spirit is simply smelly and melts gloves. I eventually found a reasonable water-based resist called Resistad, which comes from New Zealand. A French alternative, Cern’O, now seems out of production. However, the happy discovery of these two effective products coincided with a change in my work. I no longer work with resist fluids at all, focusing mostly on wax resist and some shibori techniques.

Three fluid-resist techniques I have used

After a few years, I found the ‘outline and fill in spaces’ technique very restricting. It was a good medium for some work but there was a ‘tightness’ in always having to outline shapes. I couldn’t make very spontaneous or expressive marks. The images below show three phases of my work with resist fluids. On the left is a very old piece of work (late 1980s) which shows the gutta as a white line around the design elements. Gutta is drawn on white silk, and then the dyes are ‘coloured in’. The centre image is also worked with gutta but the background was part-dyed before gutta was worked on top. More dye was painted, and then further gutta design elements added. The lines don’t show as white because they are worked over the top of a dyed surface. This layered-line approach  produces a more painterly result, but all shapes have to be outlined with resist fluid.

The right-hand image was worked with a combination of Resistad coloured with green dye, and wax. The oblong green shapes were outlined on white silk, then filled in with the same green dye. You can just see the green outlines. The background was then dyed and an expressive swoosh of wax worked down the centre to create the texture, and more dye was added. This was the start of my wax conversion!

The image is outlined in gutta and ‘coloured in’ 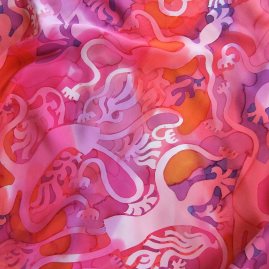 Although I can use a tjanting, the traditional tool for applying wax, I find that my work is much more free if I use brushes or found objects.  My work usually comprises a minimum of four layers of wax and dye. After completing the wax and dye layers, I partially de-wax the work by ironing it between layers of newspaper, and it then goes into the steamer. I have had to come full circle with the clean-out process since on heavily-waxed pieces, there often remains some residue after steaming which makes it feel stiff. This cannot be removed by washing, and heating water to the temperature to melt out the wax would harm the fixation of the dyes. I have reverted to using white spirit. This is kept in a large plastic container and can be re-used several times. I never handle silk items in white spirit except with tongs, so I don’t melt any more gloves. Washing out the smell of the white spirit takes several washes and rinses in a sequence of buckets.

2 thoughts on “Steam-fixed dyes for silk”