Last week I found some oak-galls, or oak apples, in a hedge. They were easy to spot after the final fall of leaves. Oak galls are nothing to do with acorns. They result from  chemicals injected into a developing leaf bud when a female gall wasp lays eggs.

Oak galls spotted in a hedge

The galls contain high proportions of tannin and, mixed with iron salts, were historically the source of a purple-black or brown ink. The comprehensive and scholarly Iron Gall Ink Website has an ink history here. The fourth century  Codex Sinaiticus, one of the most complete versions of the Bible, was written in iron gall ink, in Greek. Follow the link to read about a great collaborative project, and an entire website devoted to the Codex. Because the manuscript has been broken up and spread worldwide, the project exists to reunite it digitally.

Anyway, I picked the galls and am soaking them out. Apparently I can use a solution of rusty nails to make up the ink, according to Wikipedia’s recipe, and I shall try it in the New Year when I have found my Gum Arabic.

All this think-ink reminded me of an encounter with shaggy ink caps (Coprinus comatus) a few Novembers back. I found an ink-cap-ink recipe – and the delightful word deliquesce – on Regia Anglorum’s site here, recipe number 3. No cauldrons were available that week, so a plastic pot emptied of E numbers sufficed for deliquescing. The fungi did their thing and weren’t particularly smelly at first. They just looked a bit sinister (shaggy ink caps aren’t poisonous, although I wasn’t planning an omelette). I put the increasingly soggy black mixture in the corner of my studio and forgot about it. Until it began to make its presence felt.

It produced a putrid, mouldy, rotting smell which was murderously  incriminating. I poured the mixture through a sieve at arm’s length and improvised a cooking put from an empty tin. If the smell was bad before, nothing compared to the hellish fumes that arose from the pot once on a stove (some recipes suggest that boiling reduces and blackens the mixture). The mixture obediently reduced to a ghastly, shiny black mucus. The stench was so bad I had to hold my breath to stop myself gagging. To hell with research like this – I couldn’t live with the smell. I poured off the mixture and found a large paintbrush and some paper and made a simple snot drawing (see below). I then introduced the mixture to the far corner of the garden. 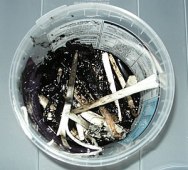 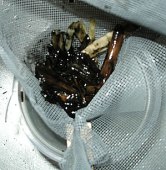 The conclusions the Ink Cap Escapade were:

1.That the recipes I found are incomplete, or some additional ingredient neutralised the decomposition and the smell. Vinegar, perhaps? As the fungus is only found in autumn, there must have been a way to preserve the ink through the year without knocking out an entire community of Cistercians with the pong. Or maybe I’ve stumbled across a new cause of the Reformation.

2. A lot of ink caps would be needed to make a good black and you couldn’t use a quill with the snot-like stuff I made. It needs to be blacker and more runny. It was too thick for a small paintbrush. Maybe I boiled it too hard.

3. Perhaps monks had no sense of smell.