Summary of my presentation to the DHA (Dyes in History and Archaeology) Conference, Hampton Court, October 27th, 2017. 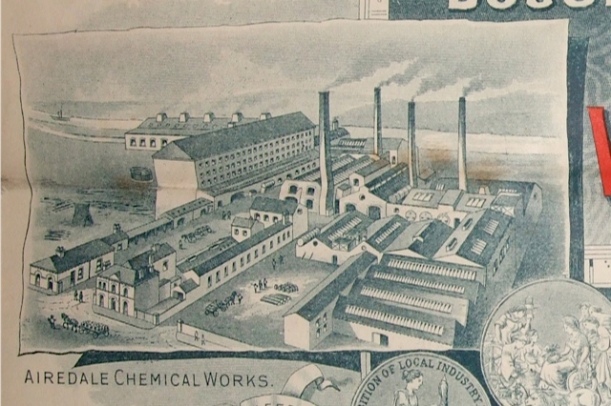 For the last nine years I have been researching an archive relating to dye manufacture in nineteenth and twentieth century Leeds. In September 2017 a large portion of it was handed over to West Yorkshire Archive Service (WYAS). The archive represents 186 years of a dye manufacturing company’s existence, and covers its life from cradle to grave.

The founding Bedford family has a long and distinguished history of political, social and commercial significance in and around Leeds. The archive is concerned chiefly with their commercial activities, and illustrates how successive generations played an important role in business developments which contributed to the emergence of Leeds as a commercial centre during the nineteenth and early twentieth centuries.

Beginnings In around 1810, a 15-year old James Bedford became apprenticed to a chemist and druggist in Leeds. In 1821 he was involved in oil refining but by 1827 was solely engaged in making cudbear and orchil.  The company ‘Wood & Bedford’ was founded in the 1850s, manufacturing natural dyes and tannins. Wood & Bedford became a leading manufacturer in Leeds, based at premises on Kirkstall Road.

Wood & Bedford brought together eleven leading local companies in 1900 to form the Yorkshire Dyeware and Chemical Company Limited (YDC). Over the next hundred years this company evolved from being predominantly dependent on natural dyes and extracts to becoming one of the major synthetic dye manufacturers in the world, known for creative ideas and innovative products.

Photo from the archive showing YDC lorry. Note the telegram address ‘Dyewood Dewsbury’ on the door!

Yorkshire Chemicals In the twentieth century the company operated under the name ‘Yorkshire Chemicals plc’, signifying its diversification into other chemical classes and acquiring the plc designation when the business floated on the stock exchange in the 1970s.

The textiles industry migrated to Asia, and in the late 1990s the company over-reached itself by acquisition of new companies. Yorkshire Chemicals went into rapid decline, and into administration in 2004. It struggled for another year as Yorkshire Colours under a management buyout, and collapsed again in 2005 when the Leeds factories finally closed. In 2008 the main Leeds sites site were demolished.

The Yorkshire name and brands survive, with the business now under Chinese ownership and continuing to trade in Europe as Yorkshire Farben GmbH based in Germany, and in Asia as Yorkshire Asia Pacific, with headquarters in China.

Archive sources The archive, which is now housed at WYAS’ Morley facility near Leeds, preserves documentary records and photographs spanning the complete history of a company whose changing fortunes broadly parallel those of the UK and European textiles industry. The collection comprises items from three main sources.

Devon source I live in a small Devon market town. In 2008, a neighbour (who is descended from the Bedfords) invited me to look at a large quantity of family papers and documents. Recognising their historical value, I undertook to find them a permanent home. The items from this Devon source are of the earliest in date, assembled around 1914 by James E. Bedford, at that time Lord Mayor of Leeds.

Demolition Source In 2008 I visited the demolition site in Kirkstall Road and asked to take some photos, explaining my research to the foreman. A fortnight later he called me as his team had found a set of photo albums sealed in to partition wall. These invaluable records now form part of the archive. There are 11 albums, with photographs dating from the 1920s until around 1990.

Photo from one of the 11 albums with a view of Yorkshire Chemicals, 1960s. It has the caption ‘Where’s there’s muck, there’s brass’.

Ex-employee Source Through my research I made contact with a large group of Yorkshire Chemicals ex-employees. Many of them had retained papers, photographs and other documents relating to the latter days of the company which they were happy to donate to the archive. One of these employees has undertaken the colossal task of indexing, annotating  and cataloguing the collection. Future scholars will be indebted to him for his knowledge and insight as a chemist, as a long-serving employee who knew the various sites, subsidiaries and employees, and as an intelligent and often critical bystander to the final company collapse.

Edited 17th January 2018 The catalogue is now online through WYAS. You can start your Search here

‘The West Yorkshire Archive Service are delighted to be the new custodians of the Yorkshire Dyeware and Chemical Company Archive, playing our part in preserving the memory of a comprehensive archive of a local business.  The records gives a fantastic insight into the creation, development, success and eventual decline of the company over a 150 year period which will be of great interest to anyone researching the history of manufacturing natural dyes and the evolution of the textile industry in Leeds and we look forward to facilitating public access to the records now, and for generations to come’.

You will find other information on my research, and the archive, by searching the blog using the word cloud.