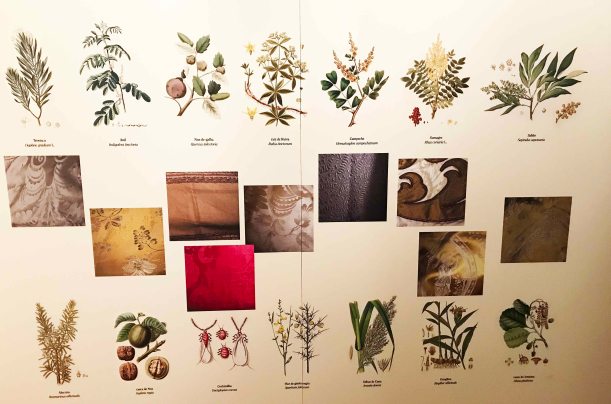 I spent most of December in northern Portugal, travelling from the north-east corner of Trás-os-Montes via Miranda do Douro, Bragança and Guimaraēs and, after a visit to Porto, to an area south-west of the extraordinary Peneda-Gerês National Park.

In Bragança’s Museu do Abade de Baçal there was an excellent display on the region’s historic silk industry including an illustrated panel on dyes. There were a few I’ve not heard of, such as Daphne gnidium. In her book Natural Dyes: Sources, Tradition, Technology and Science, Dominique Cardon lists the Daphne in her chapter on flavonoids, which indicates it was a yellow colourant. Cardon offers no local name for it in Portuguese, but the Bragança display gives it the name trovisco. The yellow dye was known in French as trentanel; daphné sainbois; or garou and Cardon notes that the dye came to rival weld in 18th century Languedoc.

The giant cane, Arundo donax, does not appear in Cardon’s book and an internet trawl came up with a few references to its pollen being used to make a yellow dye, but I found no solid information for this.

Oak galls found washed up on the shore at Moledo, near Viana do Castelo

The museum panel also illustrated some large spiky oak galls. I suggest these are of gall wasp Andricus kollari, but please put me right if you think they aren’t. Tannin-rich galls would probably have been used as mordants. I saw these galls on and beneath oak trees in Trás-os-Montes and all across north Portugal, and there were hundreds washed up on the beach near Viana do Castelo.

Oak galls used as a necklace in man’s costume, from the displays of masks and costumes of the Bragança area at the Museu Ibérico da Mascara e do Traje

Some pre-Christian traditions survive in remoter areas of North Portugal, in the form of rituals that take places at certain times during the year, with men and boys in bizarre costumes and some extremely scary masks. I saw necklaces of oak galls, along with wooden cotton reels, at Bragança’s Museum of Mask and Costume.

At the Museu do Abade de Baçal I found one reference to orchil (urzela in Portuguese) as a lichen dye used in the 18th and 19th centuries. I wasn’t overly surprised because I had never seen such profusion of Lasallia pustulata anywhere, and growing to such a large size. The lichen favours granite, the local stone; the air is clear and unpolluted, and the area remains relatively undeveloped. So the lichen grows undisturbed – and long may it continue.

Lasallia pustulata growing in Trás-os-Montes. Here it is in its wet state, appearing floppy and olive green 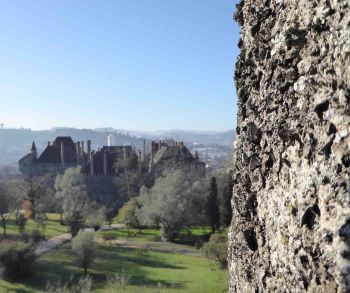 Lichen growing on the castle at Bragança

Lasallia pustulata looking dry, grey and more biscuit-like on an espiguero, or granary

The Silk Industry in Trás-os-Montes During the Ancient Regime: paper by Fernando Sousa, University of Porto

This is a gem of a museum: Museu Ibérico da Mascara e do Traje, Bragança