Explanation of my work with orchil and the orchil trade

In late 2007 I was asked to look at a dye-related  archive belonging to friends. The archive had been passed down three generations of the Bedford family, at one time chemists and dye manufacturers in Leeds. Most of it was late nineteenth / early twentieth century. I recognised that the archive was of some importance, covering a fascinating period of dye history when natural dyes overlapped and were gradually replaced by synthetics. The process of sorting and listing the contents took me several months and my friends and I were delighted when it was offered a home by the Leeds Archive Service.

While sorting the archive I became engrossed in the workings of the orchil trade, on which the early fortunes of the company were based. Orchil is a dye made from lichen and until the end of the nineteenth century was widely used to dye silks and wool various shades of purple. In order to understand how orchil was made I went to study in Spain with Anna Champeney who lives and works in Galicia. I have great respect for her knowledge and understanding of the material and the environment in which the local orchil lichen grows and thrives.

Dyeing with lichens is a a controversial subject among contemporary  dyers and  often ends in bitter exchanges. I don’t use them for my studio work but I have needed to prepare orchil for research projects which have included assisting textile conservators and chemists analysing ancient objects. I have so far been able to use material donated to me by dyers who collected lichen in years gone by, but who no longer feel comfortable using it in their own work.

Why do many of us feel so uncomfortable? Lichens grow very slowly and are immensely sensitive to changes in environment. What is plentiful in one area may be gone in a matter of years. Like tigers in a reserve, you may seem to be surrounded by them, but it’s only part of the story. Lichens have been the subject of a voracious trade for thousands of years. Until the twentieth century little was understood  of their biology and some species were totally eradicated in such areas as the Canary Islands, the Azores, Madeira etc. That’s why I personally won’t use them in my studio work. I think they have suffered enough, orchil is a very light-fugitive dye and there are other ways to make natural purple. 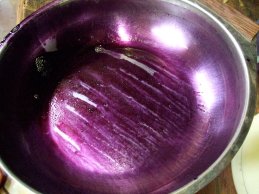 The colour of orchil 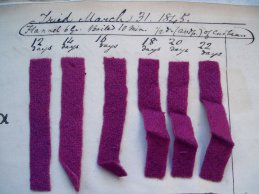 I have written and presented papers and published articles – see below. As a result, some interesting contacts have come my way because practical knowledge of orchil and orchil dyeing isn’t easily come by. I have been invited to advise or assist in several research projects, such as the one on the Alexander Tapestries at Hampton Court, led by Maria Jordan. Most recently I have given advice to several institutions studying other aspects of orchil, specifically in research work on purple parchments. Long assumed to be dyed with shellfish purple, modern analysis has enabled this to be disproved and in some examples, orchil has been identified.

Research into Yorkshire Chemicals archive with initial assistance from The Worshipful Company of Dyers; 2008

An Archive and Beyond for the Journal for Weavers Spinners and Dyers 227, p 6 -8; 2008 Downloadable via this page

The Dyer’s Tale given to the conference on Sustainability for the Worshipful Company of Dyers, 2009

A Leeds Archive Rediscovered and the Orchil Trail to Ecuador delivered at DHA (Dyes in History and Archaeology) in Posnan, Poland; 2009

The Orchil Trail: from Portugal and Angola delivered at DHA Lisbon; 2010

Beyond the Archive – to Ecuador for the Journal for Weavers Spinners and Dyers issue 233; 2010

J. M. Despréaux’ lichens from the Canary Islands and West Africa: an account of a 19th century collection found in an English archive; Aguirre-Hudson B, Whitworth I, Spooner BM; Botanical Journal of the Linnean Society, 2001; 166(2): pp 185-211

Treasures from a Leeds Dye Chemist: A Century-Old “Tyrian Purple”?. Delivered at DHA (Dyes in History and Archaeology) La Rochelle, October 2013. Joint paper with  Professor Zvi C. Koren, The Edelstein Center for the Analysis of Ancient Artifacts, Shenkar College of Engineering and Design.

Guest blog for The National Archives in their series Connecting Collections, a series of blogs by academic researchers exploring connections between archives across the UK and around the world. Published May 18, 2017 A Purple Pursuit

Research co-operation: Assisting research into orchil in tapestries undertaken by Maria Jordan at Hampton Court Palace: published online by the Institute of Conservation  Recreating the life of a tapestry: Fading dyes and the impact of the tapestry image (2012)

Assisting researchers and conservators in possible application techniques, and analysis of ‘Purple Parchments’, such as the 9th Century Krönungsevangeliar: 2012, 2013, 2014