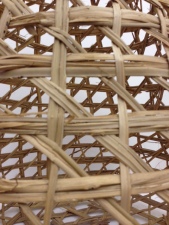 Chicken basket, or qafas, from the Tihama (Red Sea coastal plain) of Yemen 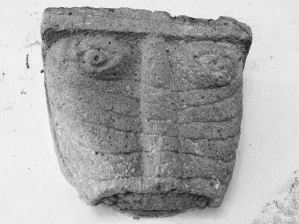 Bride’s Basket or marguna, from the Siwa Oasis, Egypt

Because the wax I use for resist work contains a proportion of beeswax, my enthusiasm for a world of healthy bees extends to work materials. I don’t have beehives but I have several nests of bee-tubes and last year they were occupied for the first time. The bees that use the tubes are Osmia rufa, also known as the Red Mason Bee. They aren’t wax producers, but they are excellent pollinators and in the recent warmer weather we watched several of them hatching. You can see the red and yellow clay plugs that the bees make to seal the tubes. Both clay colours are local (obviously, unless bees use the bus) and typical of this area of West Devon. Some of the tubes in the image weren’t occupied last year but where you see a hole in the clay, the bees have emerged. There is an interesting download here if you want to know more about these bees.

Next weekend there is a festival of basketry at Dartington in south Devon. It’s called Basketry and Beyond and it focuses on the themes of fishing, farming and fashion. The festival features several workshops and demonstrations given by international makers, a parade, residencies, etc. A beautiful exhibition of baskets called From Bare Stems is currently showing at High Cross House, Dartington, as part of the festival. It has been curated by fellow Devon Guild of Craftsmen member Hilary Burns. We went to see it this week on a thoroughly wet day, the dripping woodland surrounding High Cross House smelling intensely of wild garlic. The two baskets shown above were loaned to the exhibition by Jenny Balfour Paul. Many thanks to her for supplying captions.

The little stone beast is not connected to anything on this page except that I like it and beast begins with B. Like the baskets, I went to visit it this week. It’s from a tiny, ancient church called Honeychurch; the building has hardly been touched since it was built in the 12th Century.

One final B. The bull’s-eye rash that sometimes develops with Lyme Disease can be seen in this link . If you walk your dog in the country (particularly where there are deer), work with sheep, or live where GP’s aren’t clued up on the disease, please read it. I noticed a bull’s-eye rash some years ago from an infected tickbite and had to go to considerable lengths to be prescribed the correct antibiotic. The incorrect antibiotic won’t clobber Lyme Disease. If I hadn’t once seen an image of this rash, I wouldn’t have known to persist and might have suffered long-term consequences.