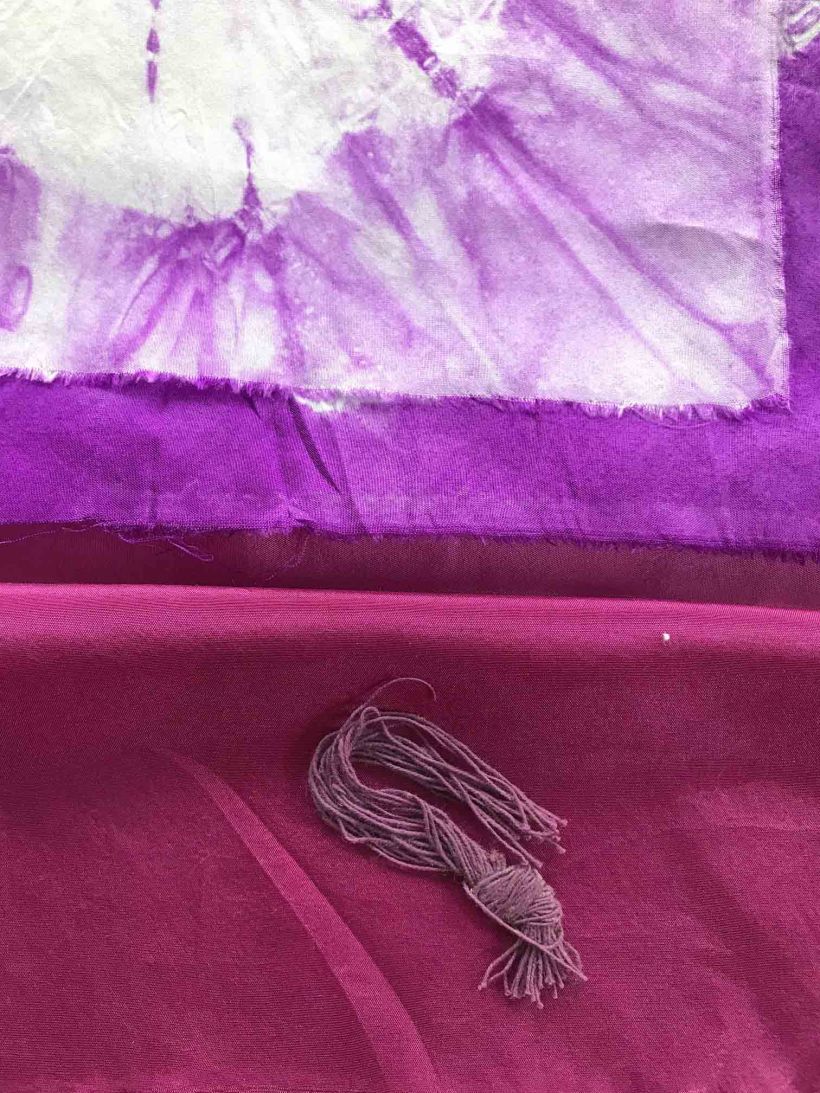 Here is an image showing an extraordinary trio of historic, and historical, purple dyes. Two are the natural dyes Tyrian Purple and orchil, whose histories are so ancient their origins are unknown. The other dye is a recreated mauveine, the first synthetic dye to be commercially developed, after synthesis in 1856.

All three dyes play a part in an archive I have been researching, which relates to a dye manufacturer based in Leeds. The company began when a young chemist called James Bedford started making orchil and cudbear, later forming a company named Wood & Bedford in around 1850. Through various changes of names and expansions, the company became a major international dye and chemical manufacturer, finally folding in 2004 under the name Yorkshire Chemicals. You can read more about the history by following links below.

Orchil was the natural, lichen sourced dyestuff on which the company’s fortunes were founded by James Bedford. But by the late nineteenth century, William Henry Perkin had discovered and patented his synthetic dye mauveine, signalling the gradual demise of natural dyes in commercial use and the beginning of chemical manufacturing. There was a family connection between the Bedford family and the Perkins’: WH Perkin’s son Arthur G. Perkin married a Bedford daughter. The Leeds company managed to weather the transition from natural to synthetic products and its archives are a fascinating record of how they achieved their success.

As to the Tyrian Purple, perhaps the most unexpected items from the archive are the genuine shellfish-dyed thread samples found in a small envelope. You can see one of the two samples in the image above. Again, please read their story by following links below.

I was contacted earlier this year by Dr John Plater, a Senior Lecturer in Chemistry at the University of Aberdeen. John has made a study of mauveine and has come to several interesting conclusions about Perkin’s dye. It seems that not all mauveines were / are the same. To read about John’s research, please follow the links below. John had read about my studies in orchil and was curious to know something of the versatility of mauveine in working practice. I sent him shibori-tied silks so that he could experiment with dyeing them, suggesting he try an immersion method on one set of samples, and separately apply dyes with an eyedropper. I find the eyedropper method very successful with synthetic dyes as it gives great control of the dye, and is very economical. You can judge which you think most effective from the page below. Immersion dyed are on the left.

Later this week I will be presenting a paper at the DHA (Dyes in History and Archaeology) Conference at the Royal School of Needlework, Hampton Court. It will describe the entirety of the Leeds archive, part of which I have been studying. It is now available for public study through the West Yorkshire Joint Services (WYJS) facility at Morley, near Leeds. I will write a separate blog about this after the Conference.

Story of the Leeds Archive on this blog

Dyes, history, and a chilly trip to Yorkshire

Some articles about the work of John Plater:

Error: Twitter did not respond. Please wait a few minutes and refresh this page.