Last month I took a ferry to the Western Isles. There is much to say about the wild, bleak beauty of the islands, and their resilient inhabitants, but this is about Harris Tweed and natural dyes. 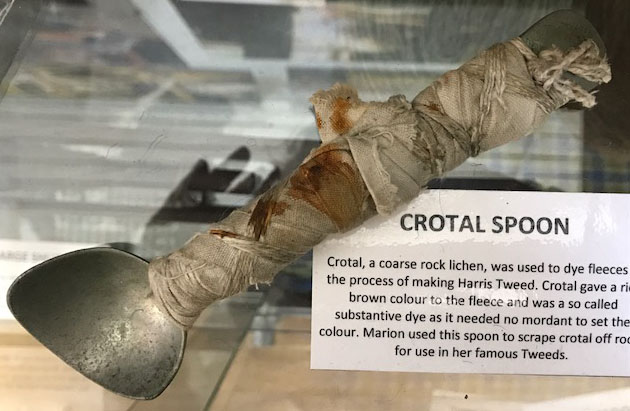 A well-timed tweet from @HTAarchive advised me not to miss a display at the old Drinishader schoolhouse, on Harris. This relates to the life and work of Marion (Morag) Campbell (1909 – 1996) who once lived nearby and had attended the school as a child.

Marion was visited by a Washington Post journalist in the 1990s, telling him, ‘I’m the last person doing it the really old way — dyeing my own fleeces, carding, making my own yarn, weaving — I even do my own ‘waulking’ to clean the tweed and shrink it a bit. That takes a lot of stamping about in Wellington boots!’ 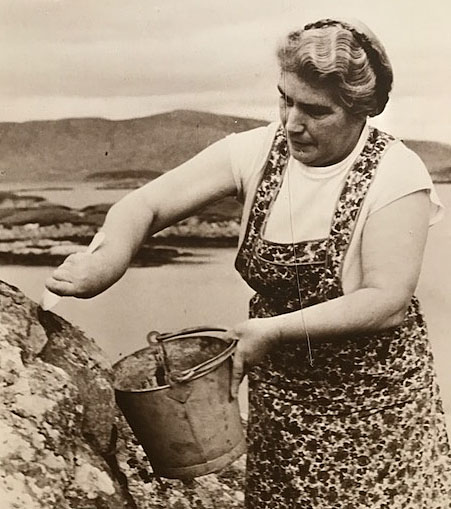 In a stylish, purpose-built centre behind the school is a contemporary Harris Tweed exhibition called Clo Mhor (The Big Cloth). It is beautifully designed and presented, contains up-to-date examples of catwalk fashion and high quality local design using Harris Tweed.  The Marion Campbell collection, housed off the shop in the schoolhouse itself, could not appear more different. It comprises a number of woven samples, lengths of tweed, photographs, newspaper articles and other items associated with Marion’s long and active life, all assembled in a cramped, higgledy-piggledy fashion and often a bit dusty. It took a little time to absorb, but was rewardingly full of treasures. I found the crotal spoon Marion used to scrape lichen from the rocks, a waulking board, her loom, and dyed but unspun fleece. Marion used only natural dyes in her work, such as peat soot, crotal from various types of lichen, mugwort, logwood and indigo.

Drinishader schoolhouse is well worth a visit and its location on the Golden Road is exceptionally beautiful.

From the Drinishader shop, I bought a copy of Gisela Vogler’s biography of Marion Campbell, first published in 2002. It’s called A Harris Way of Life. A recipe for indigo dyeing puzzled me as it does not appear to explain familiar processes common to all usage of indigo: 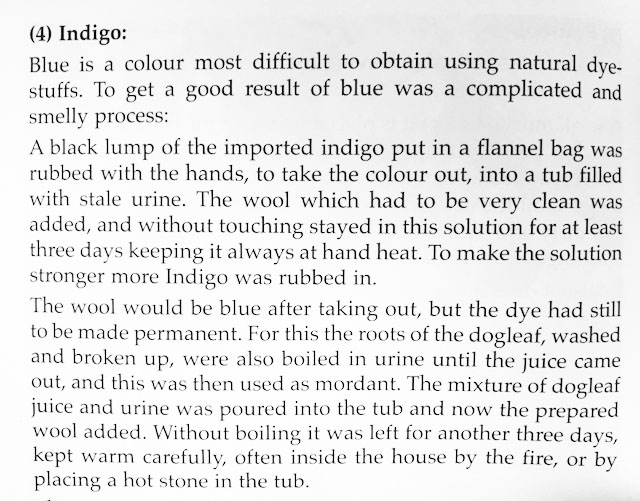 The description gives no clues as to where and when reduction (removal of oxygen) takes place although the use of stale urine clarifies that the vat will be alkaline. The statement about mordant is curious (because indigo doesn’t need one), as is the phrase ‘making the dye permanent’, and the specific reference to ‘dogleaf’. Dock is sometimes referred to as dogleaf, and is from the Rumex family.

An interesting exchange between various contacts on Twitter took place when I aired the finding on Twitter, and came up with a revelation for which I thank Anna NicGuaire, (or @A_M_Q on Twitter). In Jean Fraser’s book Traditional Scottish Dyes a similar description is included in an indigo recipe from South Uist. It gives sorrel as the ‘mordant’ ‘to make the colour adhere to the wool’.  (Sorrel is Rumex acetosa).

I later found a similar reference in Ethel Mairet’s 1916 book on vegetable dyes, where she states, ‘Some add a decoction of dock roots the last day, which is said to fix the blue. The wool must then be thoroughly washed.’

The function of sorrel or dock is far from clear in any of the three instances, but it will not be acting as a mordant in the standard sense. Dock does appear in several dye publications I have consulted, but as a colourant.

I have great respect for traditional recipes and expect there to be a reason for the sorrel or dock stages as described. I’d be very interested in anyone’s views.

7 thoughts on “A Harris Way of Life”