Several years ago I was fortunate to buy a small out-of-print hardback book in the collection of an Oxfordshire dyer. It was Ethel Mairet’s Vegetable Dyes. Originally published in 1916, the book is something of a classic and my 1952 edition represents its eleventh reprinting. I normally don’t like finding handwritten marks and notes in books but this one has been well-used, and I enjoy thinking of (at least) two dyers before me making use of it.

Ethel Mairet, née Partridge, was born in 1872  in Barnstaple, North Devon, which isn’t far from where I live. Her life was extraordinary on many levels as an influential figure in arts, crafts and education. She was married for a time to a Ceylonese called Ananda Coomaraswamy and travelled to Ceylon with him, studying and documenting weaving, spinning and dyeing techniques. She divorced in 1912 and married Philippe Mairet in 1913. At ‘Gospels’, her house at Ditchling, she set up a workshop and taught students who themselves became influential in the textile world. These include Marianne Straub and Elizabeth Peacock. Elizabeth Peacock has an association with Dartington, also here in Devon, for whom she wove a set of banners in 1938. There is an image of one of them here.

In 1931 Elizabeth Peacock co-founded the Association of Guilds of Weavers, Spinners and Dyers (AGWSD). With others, she organised the first AGWSD Summer Schools and if you have been reading previous blogs about madder and Turkey Red, you’ll know that Summer Schools are still held biennially by the Association.  Ethel Mairet taught on these first Schools, so I’m glad her madder recipe emerged with such success at Carmarthen. Opinions change over the years, however, and nowadays dyers tend to use much less alum mordant than the 25% her 1916 recipe recommends. It’s certainly a large percentage for me.

The heap contracted considerably during drying 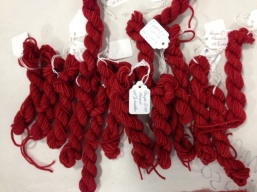 Skeins from the Ethel Mairet recipe

Blessed with some summer sun, I have been drying out the wet madder chips I brought back from Wales. I was surprised at how much the heap shrank as the chips contracted. With the liquid madder exhaust I have used a More-or-Less-Ethel (call it MOLE?) method to dye scarves. It’s ‘more-or-less’ because the exhaust is an amalgam of numerous dyebaths from Summer School and isn’t consistent with Mairet’s recipe. I have also dyed silk with it, and her recipe specifies it’s for wool. But I worked the Mairet long mordant (resting it damp for several days) and the 25% alum and also brought the dyebath to the boil for the recommended ten minutes. Boiling madder is very controversial as many recipes (such as Jill Goodwin’s) advise that raising the heat of the dye bath above a certain point will make the madder go nasty and brown. This is clearly not necessarily the case because our experiments included recipes where we boiled, and those where we didn’t, and Deliberately Boiled Brown became something of a Holy Grail.

If you read my blog regularly you will also know I am a voluntary editor on the Journal for Weavers, Spinners and Dyers which is the magazine of the AGWSD.  A new issue (247) will shortly be plopping onto doormats for the attention of international sets of dog-teeth; we are also approaching the copydate for a future issue. So it has been a frantically busy week. All the reports from the recent Summer School are included in 247, as well as regular articles and features.

The Journal is also announcing the appointment of the new AGWSD President, Dr Jenny Balfour-Paul, but this will be in Journal 248. Jenny is best known for her research work into indigo but is passionate about education and the passing on of our skills.  I owe my own passion for natural dyes to her: I attended a series of lectures on Japanese crafts at the Crafts Council in the early 1990s (Marianne Straub was another attendee!) and was infected by Jenny’s enthusiasm for natural dyes. She taught me to dye with indigo, and the rest is history.

vads online resource here. There are also images of her woven cloth

You can read Ethel Mairet’s book, which is out of copyright, online here

An image of Ethel (then) Coomaraswamy weaving at Broad Campden here

Institute of Arab and Islamic Studies, University of Exeter, here