The shibori course I ran at Ardington School of Crafts at the beginning of last month will be repeated on Thursday May 1st and Friday 11th July 2014. There will also be an introductory ‘taster’ day on natural dyes on 10th July 2014 plus a day on shibori using indigo on May 2nd. Look out for the courses in Ardington’s forthcoming programme.

On June 22nd and 23rd I took part in a new outdoor event at West Dean called Fusion. On the first day I was demonstrating and selling my work, and on the second I led three 90-minute workshops designed to introduce students to working with wax and dyes. The evening before Fusion, I arrived at West Dean to set up and the weather was fine and sunny. It was only a day off midsummer night and I took a walk up onto the hills above West Dean to look down on the tented site. The moon was up and great fields of oxeye daisies caught the evening light. It was like walking on paths through moonlight. Marvellous stuff, but no time to go all romantic because we live in England and it was the last fine weather we saw until Sunday afternoon. 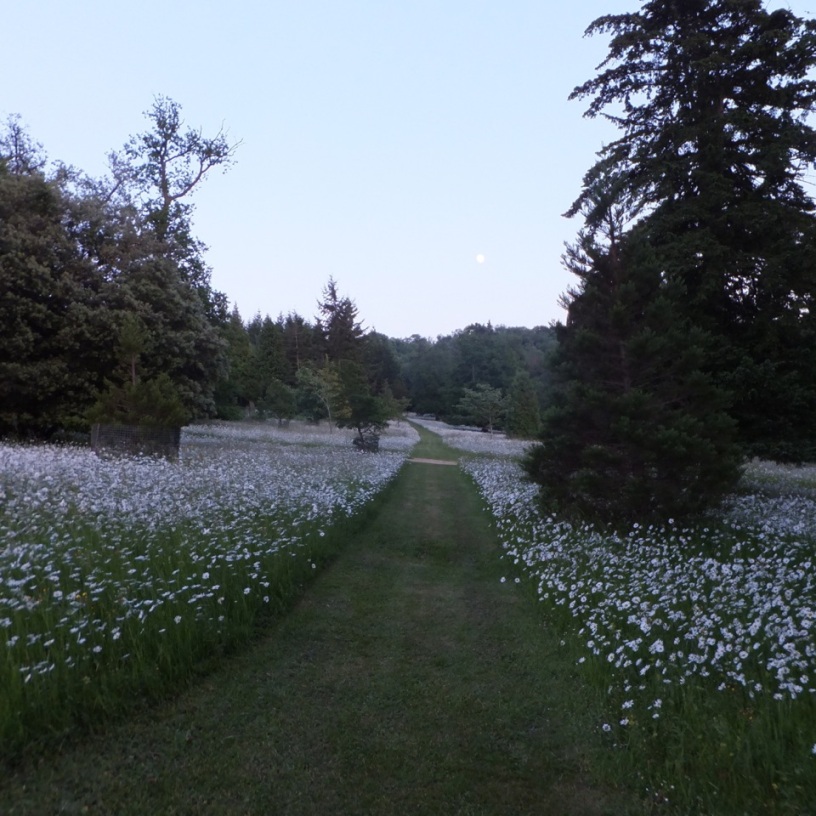 Tents for Fusion in evening light 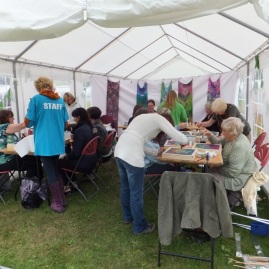 Simple wax tools made from cork, wire and nails 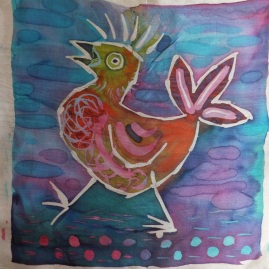 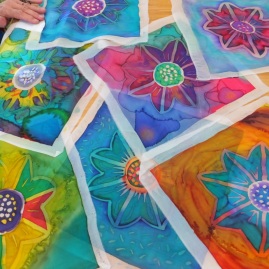 Hot waxpots, dyes and fourteen students confined in a tent taking off for Chichester, anyone?  Not a mix I would normally recommend. But  with a few precautions all seemed to go ok. I was pleased with what students achieved. The sessions were carefully pre-planned and timed, with a basic traced design already on the silk so no-one had to panic because they were expected to draw anything. With the assistance of heavy-drinking Devon friends, I had made a set of simple tools using wine corks and wire which could be dipped into wax to make textures and lines. I offered students small, cheap, bristle brushes which wouldn’t drip wax onto the silk. For sessions two and three we pre-stretched the silk to save time, but students could choose colours and some tools and textures. Without friend and helper Fiona it wouldn’t have worked half so well, and here is a huge and grateful cheer for her.

In my last post I mentioned a family visit. My brother, who is well known for his epic perambulations in rather a small boat (see here)  has been visiting from Australia. In mid June we made a trip down to Falmouth, where several of his voyages have ended and begun and went to the National Maritime Museum. We saw the replica of the Bronze Age boat Morgawr which was built by a team of volunteers led by master boat-builder Brian Curnby. Paul Harry has made a brilliant time-lapse film of the building: see here.

Section of the boat showing sections sewn with yew withies

One of the things that  fascinated me about the oak boat was that it was sewn together using yew withies. These appear to have been twisted into a kind of rope and pulled up very tight, probably assisted by shrinkage. From the Bronze Age onwards, English longbows were made using one stave of yew (Taxus baccata). The wood is very springy, and the sapwood and heartwood together combine to resist tension and compression. I don’t know all the techie stuff, but I ‘did’ Shakespeare’s Henry V for O Level.  I remember being not in the least interested in his tedious French wife, but far more intrigued by the English longbows used at Agincourt. There is more here about the history and the wood relating to bow making. Wikipedia has a page on yew trees with images of ancient examples from Northern Europe.

Possibly, the same qualities that made yew effective for longbows also worked well for sewing boats together, but I don’t know how the structure of the withies would differ from larger staves of yew used in bowmaking.  The most ancient trees in the British Isles are yew, with the oldest surviving wooden artifact from these shores being a spearhead an astonishing 400,000 years old – see link below.

2 thoughts on “BB2 Teaching dyes, Fusion and Sewing a Boat”