The first task of the day was to devise a test sequence of Turkey Red dyeing in which a full solution of soaked and ground madder would be used to dye with, then the dyestuff re-ground and re-used to test the exhaust of each previous phase. It is expected that each phase will produce lighter tones than the last, but dyed cotton may also shift in colour as various chemicals are taken up in the dyeing at each stage. The four groups in the course undertook a stage of grinding and re-grinding, and then the cloth dyeing. At the end of the second day we are half way through this exercise. Each stage takes a while to complete.

The sheep-dunged cotton from yesterday was first worked in the oily emulsion prepared from olive oil and potassium carbonate. It was then divided up for the four dye stages.

Grinding madder in a liquidiser

Working the oily emulsion into prepared cotton for Turkey Red

While this exercise continued through the day, each group worked on recipes selected from Debbie’s suggested choices. My group completed dyeing silk according to a historic recipe (Haarlem Manuscript 281/1/1)  republished in Judith Hofenk de Graaf’s book The Colourful Past. The results were pale and salmony, not the ‘beautiful red’ we had hoped for. We must re-check calculations and compare results with another group using the same recipe.

The Jill Goodwin recipe we are using has turned out more successful. Madder had been soaked overnight with two tsps powdered chalk (calcium carbonate). This morning it was placed on the stove and over the period of an hour (and before the yarn was put in it) the temperature raised to a definitive ‘no more than 158F’.  Goodwin’s instructions are somewhat stern on temperature and I guarded it with a thermometer and my life. The dyebath developed  a very marked purple foam but in the wool yarn dyeing there was no shift from the expected madder shade. The yarn is resting in the cooled dyepot so I have no picture yet.

During the day a small group studied the water analyses brought in by students to accompany their 5 litre water samples. This revealed that the softest water comes from the water in my area, West Devon. 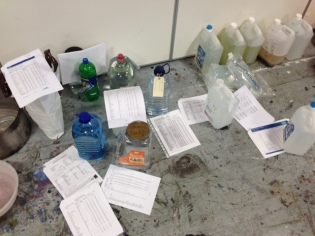 Tomorrow is a half day at Summer School and we off on a trip to the National Wool Museum at Dre-fach Felindre. At least, I think it’s there we’re going: my piece of paper doesn’t confirm the destination. No doubt we will find out when we get there. If it isn’t Dre-fach Felindre, it will be somewhere else.